Welcome to YA Scavenger Hunt! This bi-annual event was first organized by author Colleen Houck as a way to give readers a chance to gain access to exclusive bonus material from their favorite authors…and a chance to win some awesome prizes! At this hunt, you not only get access to exclusive content from each author, you also get a clue for the hunt. Add up the clues, and you can enter for our prize–one lucky winner will receive one signed book from each author on the hunt in my team, including HOW WE FALL! But play fast: this contest (and all the exclusive bonus material) will only be online for 72 hours!

Also, scroll to the bottom of this page for an excerpt and chance to win HOW WE FALL as an extra giveaway!

Go to the YA Scavenger Hunt page to find out all about the hunt. There are SIX contests going on simultaneously, and you can enter one or all! I am a part of the BLUE TEAM–but there is also a red team, a gold team, an orange team, a red team, and an indie team for a chance to win a whole different set of signed books!

If you’d like to find out more about the hunt, see links to all the authors participating, and see the full list of prizes up for grabs, go to the YA Scavenger Hunt page.

SCAVENGER HUNT PUZZLE
Directions: Below, you’ll notice that I’ve listed my favorite number. Collect the favorite numbers of all the authors on the blue team, and then add them up (don’t worry, you can use a calculator!).
Entry Form: Once you’ve added up all the numbers, make sure you fill out the form here to officially qualify for the grand prize. Only entries that have the correct number will qualify.
Rules: Open internationally, anyone below the age of 18 should have a parent or guardian’s permission to enter. To be eligible for the grand prize, you must submit the completed entry form by April 6, at noon Pacific Time. Entries sent without the correct number or without contact information will not be considered.
SCAVENGER HUNT POST

Today, I am hosting Christine Norris on my website for the YA Scavenger Hunt!
Christine Norris is the author of several speculative fiction works for children and adults, most notably The Library of Athena series. She is extremely overeducated, having a B.S. Temple University (Kinesiology), a B.A. from UMUC (English), AND a Masters in Library and Information Science from Southern Connecticut State. All of which means she loves to be in the library, which is her secret day job (whoops…). She is married with one son, two rescued cats, a rescued Jack Russell, and a rescued palomino rabbit. There’s a lot of rescuing. She also has a complete weakness for Doctor Who, Sherlock, and other British television shows, as well as an addiction to movies, re-told fairy tales, and police procedural shows. She also believes in fairies. Christine is represented by Jordy Albert of the Booker Albert Literary Agency.
Find out more information by checking out the author website or find more about the author’s book here! Christine’s Website

Add A CURSE OF ASH AND IRON on Goodreads
EXCLUSIVE CONTENT 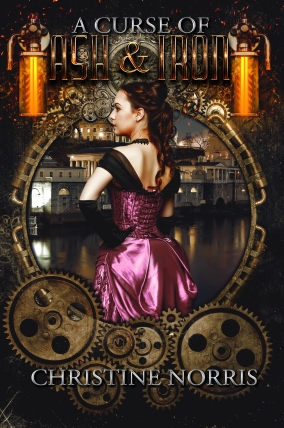 Christine here! Thanks to Kate for hosting my part of the YA Scavenger Hunt!

I am not sure how many other authors on the YASH are talking about books that haven’t been released yet, but mine isn’t due out until May 21! I thought it would be fun to write up a list of things people should know about the book before it comes out.

Top Ten Things You Need to Know about A Curse of Ash and Iron
10. The book is set in Philadelphia in 1876. It was a big, important year in the city and I use quite a few historical references, including the Centennial Exposition and the fact the arm of the Statue of Liberty was on display. For fifty cents you could walk up inside, and that was how they funded the rest of the statue.
9. Originally, this book had a different storyline. Like, completely different. It was after I got a really long but very helpful rejection letter from a super-awesome agent (not my agent, who is also awesome), I ripped the whole book apart and totally changed it to what it (mostly) is now.
8. The story is, in fact, a Steampunk retelling of Cinderella. I tried to incorporate as many elements of the original GRIMM’S story as possible. See how many you can find! No mice, because that’s from the Perrault version. Sorry.
7. Almost all of the character’s names in the story come from my family tree. The notable exceptions are Ellie and Olivia. Clarence the cat got his name from my great-grandfather.
6. There is a big scene in the book set in Cape May, NJ, and it includes the famous Cape May Diamonds. Look it up.
5. In the original version, there was no prologue. A certain editor at a big NY publishing house told me it needed a prologue. It’s all his fault.
4. Curse originally had a different publisher. Some people might remember that. It was originally contracted by Strange Chemistry, but then the main publisher shut down the imprint three months before it was supposed to release. But since it happened before the book was published, I got the rights back right away and my agent was able to make a quick turnaround and sell it to Curiosity Quills. They have been awesome!
3. The carriage Ben makes for Ellie (it’s Cinderella, of course there’s a carriage) was originally pumpkin-shaped. That detail ended up being cut when an editor at an NJSCBWI mentoring workshop told me it was a little too ‘on the nose’.
2. The original title for the book was Smoke and Mirrors. The first publisher asked for the title change because there is a book by Neil Gaiman with the same title, and they didn’t want to confuse the two (I wish!) My agent and I brainstormed for days, coming up with alternate titles like Masquerade and Midnight and all manner of other things that just didn’t fit.
1. I actually like the new title better. A Curse of Ash and Iron will be out from Curiosity Quills on May 21!!! You can like it on Goodreads now, though 🙂

And don’t forget to enter the contest for a chance to win a ton of signed books by me, Christine, and more! To enter, you need to know that my favorite number is  5.  Add up all the favorite numbers of the authors on the blue team and you’ll have all the secret code to enter for the grand prize!
CONTINUE THE HUNT
To keep going on your quest for the hunt, you need to check out the next author! Lisa Tawn Bergren

2 thoughts on “YA Scavenger Hunt”